skip to main | skip to sidebar

Angel: Not Fade Away 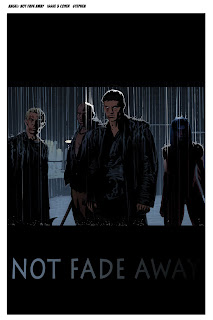 So my next book is indeed an adaptation of the amazing, nay, sacred, final episode of Angel.
The original script was by Jeffrey Bell and Joss Whedon, and is being adapted for comics by uber-scribe Scott Tipton(who certainly knows his way around an Angel script). Joining me on the art chores as colourist is the very talented(and Irish!) newcomer, Ciarán Lucas. We hope to knock your socks off.
Do we hope to expand upon certain scenes that left the viewers gagging for more?
You bet yer sweet bippy we do. I'd hate to do something like this that was purely a straight re-telling of the episode. So worry not, we'll try and squeeze whatever extra content we can in there! Its a very dense episode, so we'll only have a limited amount of instances to elaborate on existing scenes, but we'll do our darndest to make those instances well worth it.
Posted by Stephen Mooney at 7:13 AM

Fantastic image. The improvement in your art on all front is insane, and I'm loving it. Great cover, and I'm actually excited for an adaptation... which is odd. Should I get that checked out? But yeah, this is excited. I agree with you, only for "Not Fade Away" would an adaptation be worthy. It's like the Angel equivalent of nirvana. The state of mind, not the band. Well, if you like the band, then the band too.

Nice cover. I like that you made "away" half-faded away. It's a nice detail.

I can't say that I love the episode, but it will be nice to see it "filled out". Or "fleshed out", not sure what the phrase is.

You don't love the episode?! Wow. Its like my favourite hour of tv ever. That said, different strokes fer different folks! Tis what makes the world go round. Out of curiousity Skytteflickan88, what is your favourite episode?

remember,the reason you're getting all this good fortune your way is because you're destined to do a firefly/serenity comic book,
make it so.

Looks great! "Not Fade Away" is one of my favorite Angel episodes. The only thing I didn't like about it (besides being the last eppy) was they had so many things to tie up that it feels rushed in places. It'll be great to have some new material.

Hey lookee! We got Brian and Nick on here, all we need now is Franco and we'd have the band back together!

oooh, always loved that iconic image from what's probably the best Angel episode. Are the extra tidbits Joss approved? Can we take these as canon?

Waiting in the Wings.

Or Life of the Party or-

It's not that Not Fade Away isn't excellent. It's has awesome action, makes me cry and smile and all that, it's just that I felt like like I lost too many characters in one episode. Not just because some died, but because some "behaved badly".

But yay on Lindsay finally dying:D

Excellent job dear!!!! I like it. Angel is a show that is going to live forever because it never gave in and changed itself around in order to be more friendly for the masses. I love this show. You wanna watch this show then go ahead and download Angel Episodes for free from here.

Angel was just being a great show that was telling great stories. Everything about this show is perfect. The casting, the writing, the directing, the special make up effects. So you wanna watch this show then go ahead and download Angel tv show for free from here.

Stephen Mooney
I've been working as a pro artist for 15 years, on comicbooks, animation and videogames.